Nagasaki where no Westerners we!

So,
Judy and I decided to do an early morning shoot. ( photos not guns!) and were up and gone by 6.30am. I know that’s not early, given we routinely wake at 5.30am no matter the time zone or bedtime. Here, sunrise is around 6.45am!
Heading to the famous Meganebashi Bridge, which, when the water underneath is calm, reflects the arches......yes, you’re quick, thus looking like a pair of spectacles! It is beautiful, serene and it was so lovely to just wander around with no one but the rare local walking a dog. It always surprises me that most live in modest homes with maybe a small yard, but the Japanese love big dogs! 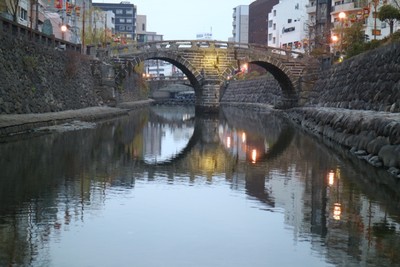 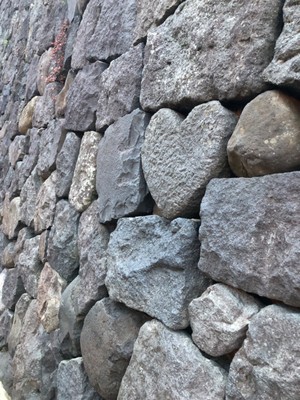 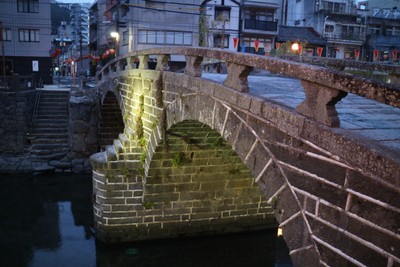 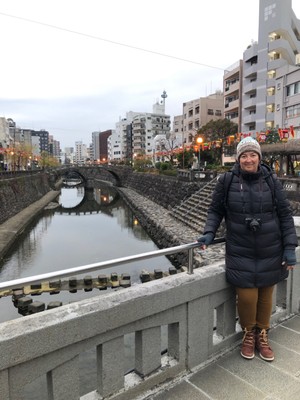 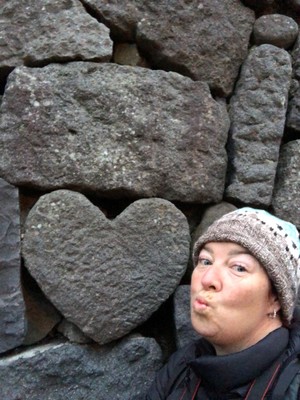 I had watched a programme on Kyushu recently and knew that somewhere along near the Meganebashi Bridge was a hidden stone, built into the sidewalls in the shape of a love heart. Legend is that if you kiss it, you will have everlasting love. I did kiss it for a while.........????????????????
Next we decided to walk to Kofukuji Temple. We arrived literally as the caretaker was readying for the day. No one else was there so we could quietly wander and ponder all to ourselves. We found that Judy could easily have lived several thousands of years ago without hitting her Door way to an original school entry was the perfect height for her ! Hehe! 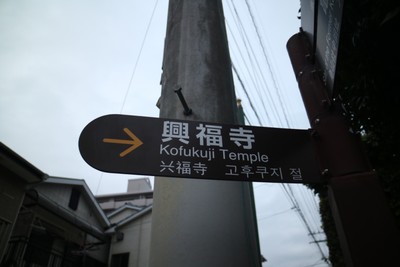 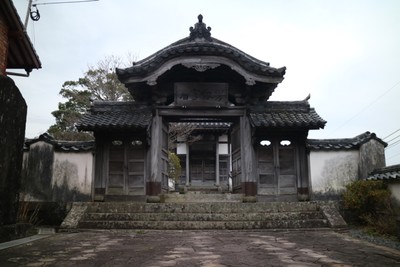 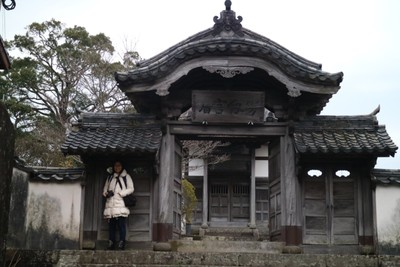 Kofukuji Temple is the oldest and one of the most important Chinese-founded temples in Nagasaki. It is the birthplace of the Obaku school of Zen Buddhism in Japan and has many interesting features.
The temple was established around 1620 by a Chinese monk at a time when large numbers of Chinese merchants were coming to Nagasaki to trade. The complex was originally set up as a place to pray for safe sea travel for the merchants, and the construction is heavily influenced by Chinese architectural styles, making it feel different to other temples in Japan.The temple grounds contain a number of buildings, including the main hall, originally built in 1632, which serves as a fine example of Chinese-style architecture of the time.
What I found interesting was that the bell that was hung in the bell tower was requisitioned during the war to melt down for weapons. It no longer exists.
I bought a book last trip ( Goshuinco) where you collect a seal ( of sorts) from Temples and Shrines. Some are printed, and then the calligrapher adds the date, some are entirely done as you watch. They are beautiful! I didn’t bring my book this morning so they had one pre prepared.
Each goshuin seal is individually crafted by a monk of priest at each place of worship. The seal consists of a stamp with red ink special for the temple/shrine with a handwritten calligraphy on it, which specifies the name of the temple/shrine, the date of visit and sometimes a small prayer distinct to the place where you got the Goshuin from.
Underneath you will find the date of your visit written in Kanji, where the year is mentioned first, month next and date at last.
The left of the page contains on the top corner the ranking of the temple and the bottom will show you the name of the temple visited.
The most eyecatching part of the seal however are the big characters in the middle which refer to a specific phrase, prayer or the deity which is enshrined inside the temple. The red stamp behind this centerpiece is the stamp varies from temple to temple. 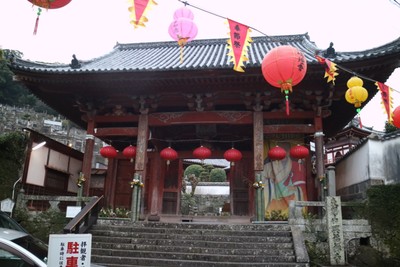 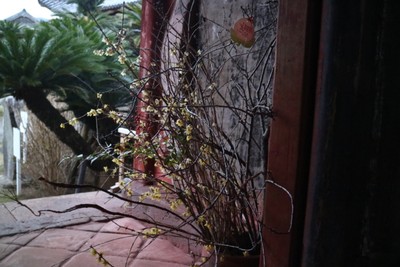 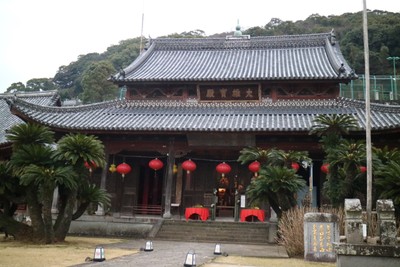 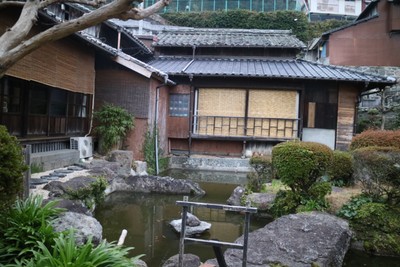 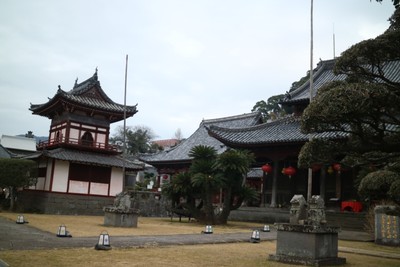 They are beautiful and a great souvenir from Japan as no one else has them unless they’ve personally been!
We decided to head back to the hotel to summons them boys, breakfast consumed we headed for Dejima ( I talked about this place and it’s part in history yesterday!) to explore the area that has largely been rebuilt and renovated to show the area where the Dutch lived. It was fascinating smell of the wood was soooooo gorgeous. Umbrellas at the ready we were mesmerised by the artefacts discovered, old photos, China ( lot of it Dutch) and details. The Japanese do these things very well indeed. The wallpaper in the various rooms in buildings was all reproduced off photos or paintings then hand carved stencils were made to them hand replicate the wall paper. It was incredibly beautiful. 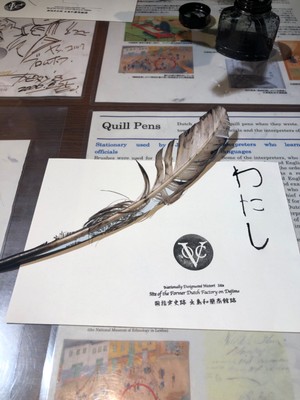 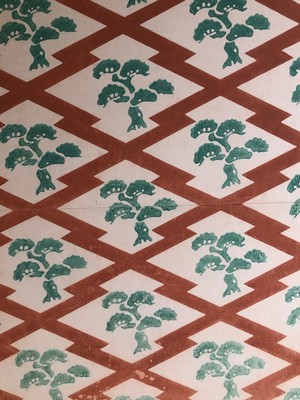 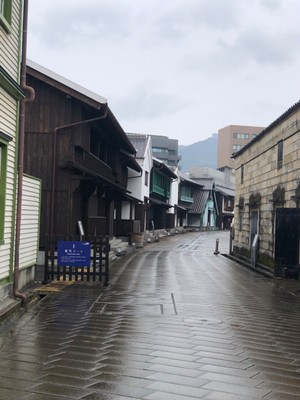 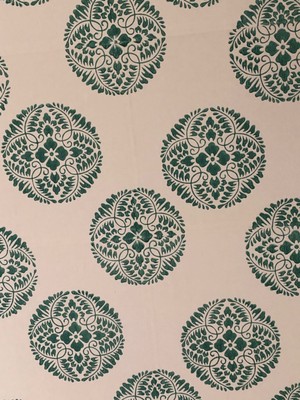 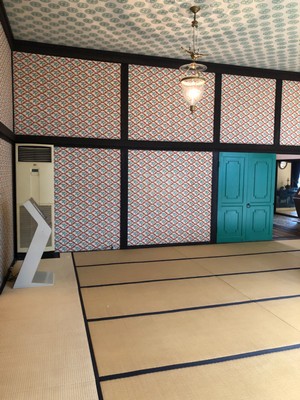 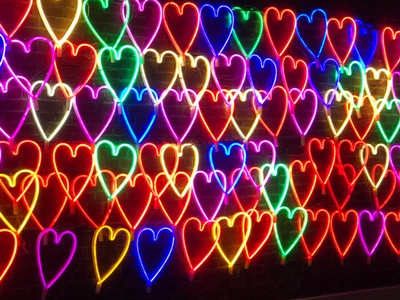 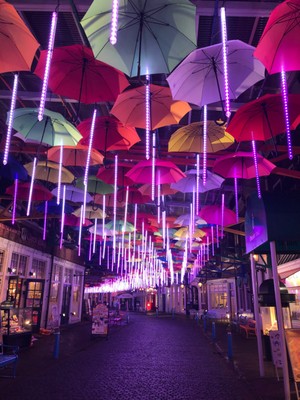 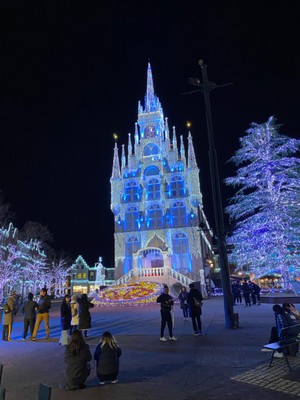 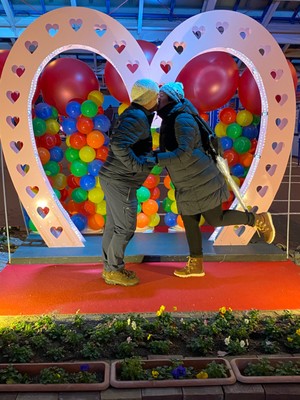 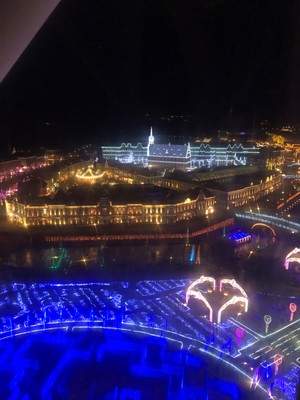 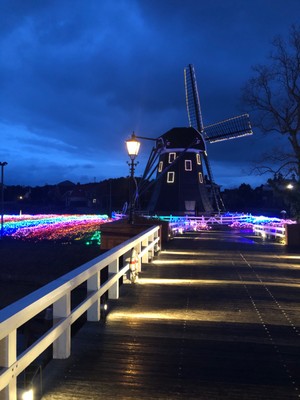 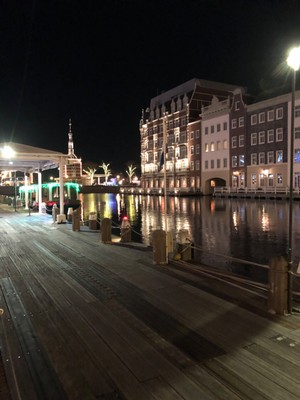 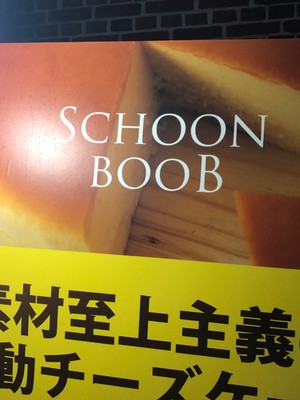 We headed back to the covered walkways of the market streets near Chinatown and Judy and I managed to lose the boys every 5 minutes . Seriously, try losing a red head in a sea of dark hair.........it’s easier than you think! We decided to attempt to keep an eye on them, until something else caught our eyes, usually food, and usually we had to buy whatever it was. Then we’d have lost them again, and so began the cat and mouse game again. The only thing we disagree on is usually which direction we need to go in the streetcar! Some of us have a great sense of direction, some, sometimes, not so great. Of all the trips we’ve done on streetcars so far, we have not once, anywhere seen another Westerner. It seems that either tourists don’t venture to Nagasaki or not at this time of the year. Anyway, we stick out like proverbials on a bull! That is not to say locals are surprised and elated when we greet them or thank them in their local language. I’m currently teaching Mick how to say excuse me in Japanese. I’m sure he will have learnt his second word by the time we get home ???????

Judy and I had researched illuminations a while ago and decided to take the boys to Huis Ten Bosch. It is like Disneyland, with huge different theme areas, but with a Dutch slant and a Japanese twist added for good measure. It was so big- the infrastructure was enormous. The lights were truly breathtaking! A great time was had by all.
Our favourite purchase, the Schoon Boob. What do you think it is? It’s cheesecake of course haha haha
Mick and I asked Jack to take a pic of us kissing with the love heart....he hates us kissing ( teenage thing!) so he took 10 pics of our feet, or us, but cutting off our heads. Grrrrrr.... lucky Judy obliged us!
We were so full of energy until we wandered back to the station to catch the 9.46pm train back to Nagasaki, that arrived after 11.20pm.........we still had washing to put in the dryer so I begrudgingly staggered down to put it in and Must have fallen asleep within seconds.
We do plan big days of sightseeing but you never know if you’ll be back so best be using your time wisely!
Tomorrow we are off to Fukuoka!

Posted by Jochester71 17:20 Archived in Japan