After a very comfortable train journey, reaching speeds of well over 200kph we arrived in the super big metropolis of Osaka! We needed to store luggage until we could check in to our apartment in Dotombori so found some lockers.......given the complexity of the underground stations, and our affinity to find exits to street level, we took pics of the area, the exit signs, the view from the street in an attempt to not lose our luggage forever in the endless abyss that is a Japanese train station ( more aptly called a mini underground city). We all tried to remain calm, knowing we could locate it again!
Onto the streets and heading to Kuromon markets. I just love the fresh markets in Japan. They are sooooo big, covering blocks at a time, with mini streets shooting off every few metres! The smells, the vegetables I’ve never seen or heard of......and then we see it......our first sighting of an Osaka delicacy......the much revered, highly sought after, amazingly poisonous...................PUFFER FISH ( called fugu )
My eyes lit up! ( when in Rome ) Mick rarely tells me not to do anything, but this was one such time! A resounding NO! I enacted my female softness......complete with doggy eyes....No! I said I’d loved my 48 years so far........tomorrow is my 49th......I’d be ok.........NO!
I wandered past............thinking he’d change his mind......he didn’t! 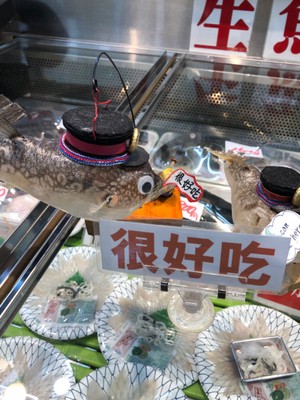 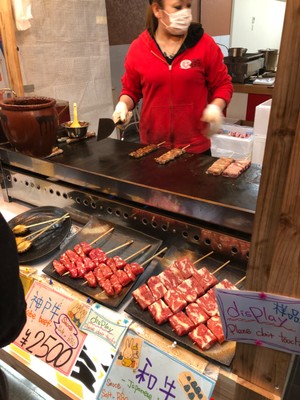 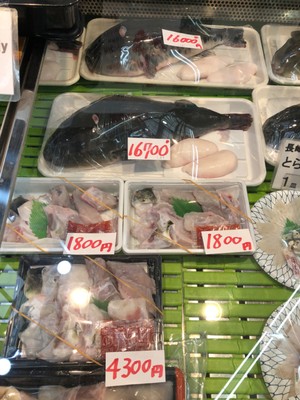 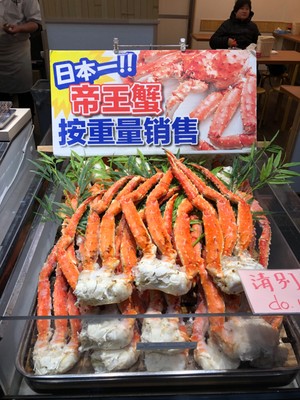 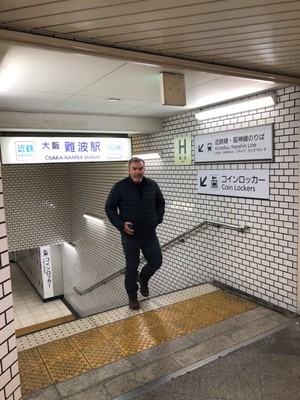 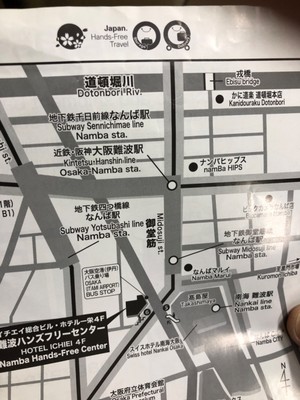 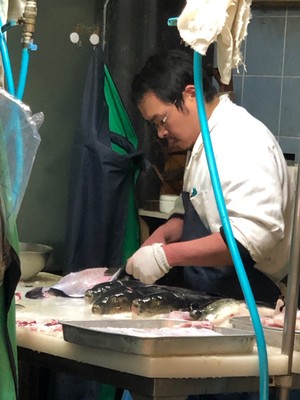 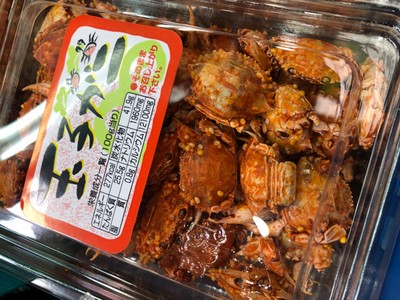 The streets of the markets are so crowded. I hate big crowds at the best of times. Soooo many tourists. One of the first voices we hear is a fellow Australian. Don’t get me wrong, I love being an Australian. However, when you travel, they can be so downright obnoxious and rude. This is such a gentle culture, and you really do need to be a bit more submissive perhaps. Anyway, giant crabs, whale meat again, so many delights! It’s an assault on the senses- smell, taste, visually!
We successfully found our luggage and headed for Dotomburi and our apartment. It’s a great little two bedroom apartment! With a washing machine to boot........a requirement when travelling light!
We are literally in the busiest and most bustling food/ entertainment area of Osaka. Massive billboards everywhere, neon signs, giant crab, giant melonpan, giant pufferfish, ramen, okonomiyaki, takoyaki, cheese tarts....seriously...........I could live here......and be fat and happy!!
We again donned the puffer jackets ( looking more like a puffer fish than I care to admit!) and headed out to explore! The one thing you do in Japan is walk.......a lot! Our feet are now in a constant state of tenderness........sitting gives welcomed and short lived reprieve, until you stand again.
The most difficult decision we have daily is where to eat. The choices are endless, and we don’t know which one is better or worse than the next! We really just go by pictures! Nice pictures help! Takoyaki, okonomiyaki, Gyoza and beer is the order of the day.
We decide to take Jack back to the apartment and feed him- he wanted a melonpan which is like a sweet bread bun filled with Icecream! They are sooooo yummy! We have one literally beside the entrance to our apartment building ( simply could not have been better placed!) Judy asked Mick to see what time they closed tonight as we were off for a beer then hoping for a melonpan before bed. He didn’t ask, but that’s ok as this area is almost open 24 hours a day.
We settled Jack in with his wifi so he could contact us and headed out in search of a little isikaya for a quiet beer! We somehow found the girly area! ( two night is a row for me....I’m somehow able to locate these areas easily ). The men or women in coats standing out the front hawking for patrons. They don’t approach us- mainly because we are two women, and they don’t approach Mick probably because he is a Westerner. We find a teeny tiny hole in the wall blues bar. We climb in.......walking in is a bit of a joke as the bar is about 2 feet inside the door!

There is the owner and two men sitting at the tiny bar . We order our drinks and eventually another man comes in.....he asks is we are American.....I correct him and he tries his limited English skills! He proudly proclaims “AC/DC “......then “ Olivia Newton John”....we laugh and let him know we understand and then begins the raucous laughter that occurs when broken Japanese and broken English collide.........he tells me that I am royalty and I tell him my hair is natural.......he says he’s a Batchelor, we say Judy is single, we keep ordering beers......he says he loves Australia and has a passport........the conversation actually glides along easily, and we all have a great time. Eventually, after a few beers we head home.

Since arriving we have had jam packed days and nights! No nanna naps available! We decide that the melonpan will be a perfect snack before bedtime! We are deciding what flavour to have and I can taste it’s cold sweetness already! We near the apartment and excitedly turn the corner and then we see it! Judy playfully punches Mick, the taste leaves my mouth. It’s shut! Closed! No melonpan for us tonight! Bummer......we’d built it up so much and Mr Melonpan had let us down! 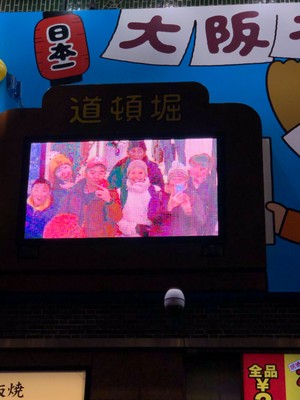 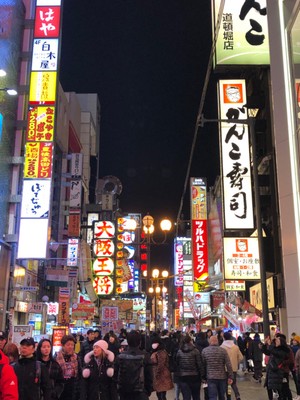 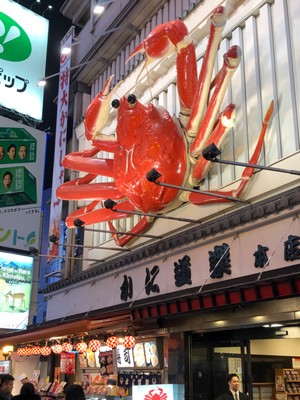 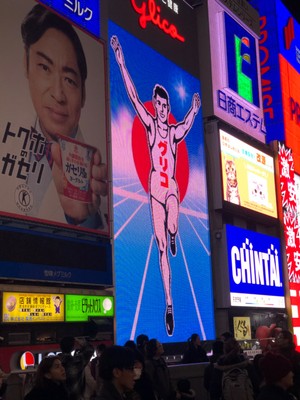 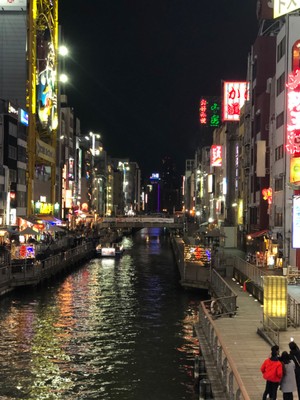 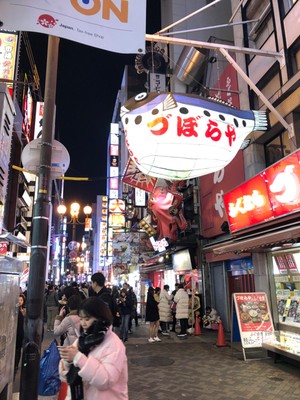 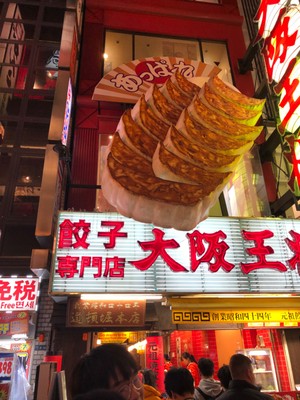 Posted by Jochester71 16:55 Archived in Japan