Waking up in Osaka, Japan for my 49th birthday was quite delightful! Toasty warm in the apartment and the sun was shining outside. Even though the sun was out, and bright, it was still chilly! So many locals walking around wearing just a business suit and shoes, or thin trousers and thin coats. We look like we are already in the snow with scarves, beanies, puffer jackets, snow boots! We are at least warm so looks don’t. Punt ( do they Michelle R. Hehe)
We were meeting Moe this morning, a guide we had last time in Kyoto, and I was so excited about seeing her again! She arrived right on 9am and we scurried off towards Osaka Castle. Interesting fact, we see a sign that says Osaka- Jo. Jo means castle........who’d have thunk it! Perfect I thought! Perfect place to spend the morning. The Castle itself was built in 1583 on the former site of the Ishiyama Honganji Temple, which had been destroyed by Oda Nobunaga thirteen years earlier. Toyotomi Hideyoshi intended the castle to become the center of a new, unified Japan under Toyotomi rule. It was the largest castle at the time. However, a few years after Hideyoshi's death, Tokugawa troops attacked and destroyed the castle and terminated the Toyotomi lineage in 1615. Osaka Castle was rebuilt by Tokugawa Hidetada in the 1620s, but its main castle tower was struck by lightening in 1665 and burnt down.

It was not until 1931 that the present ferro-concrete reconstruction of the castle tower was built. During the war it miraculously survived the city wide air raids. Major repair works gave the castle new glamor in 1997. It has an informative museum about the castle's history and Toyotomi Hideyoshi. There was a huge amount of people there.......knowing how much I love tourists I was a bit miffed! We had the option of an elevator to the 8th floor, or stairs. We chose stairs. Wisely. The line for the elevator was extreme and we would have been waiting quite some time. Stairs were found and up we went.......now I’ll be honest, until the 5th floor I was totally ok......yes, getting my exercise in, this was a great idea. However, something happened to my legs around level 6.......... I just did that thing I do.......I trick my brain into thinking we are nearly there by only looking down at the steps. That way, I don’t see how far it is to go! Worked a treat, viewing level accomplished......just don’t speak to me for a minute whilst I concentrate on breathing! Wow! What a reward! The views are breathtaking.......to think that 437 years ago someone had the skills to build this! So, so beautiful, even though it has been destroyed and rebuilt since it’s original days. I love that Japan has these amazing buildings, shrines and temples and they just build around them. But, they absolutely leave the grounds intact so there are these historical green havens everywhere dotted through towns and cities. 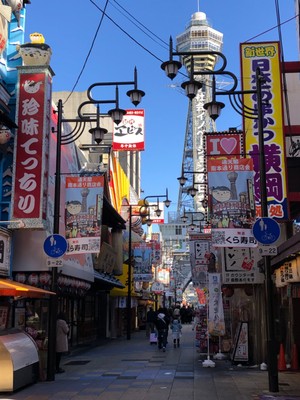 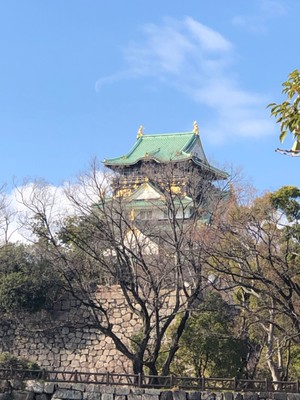 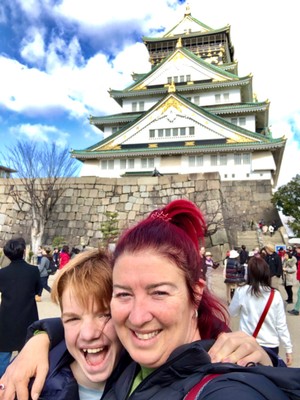 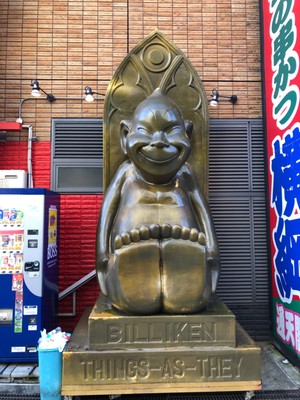 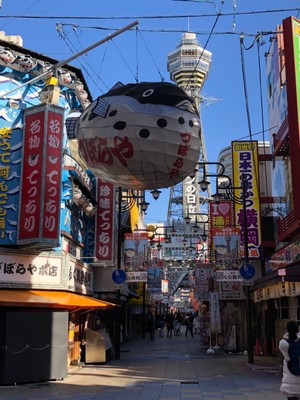 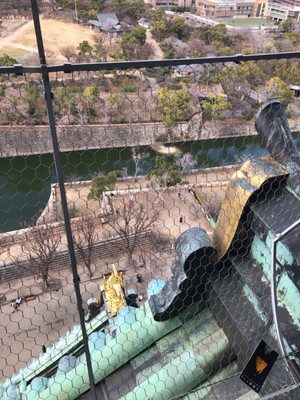 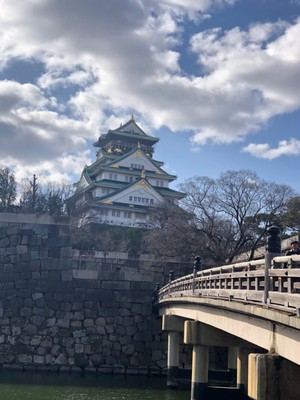 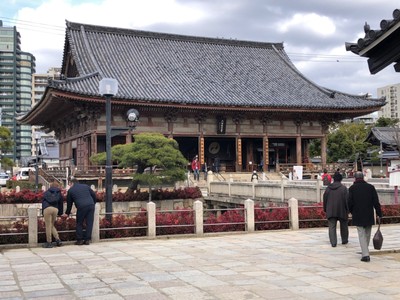 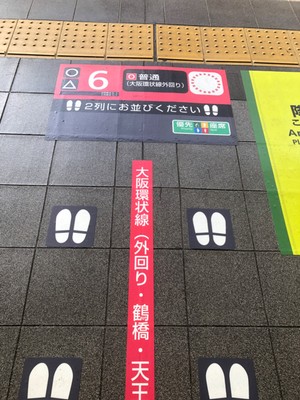 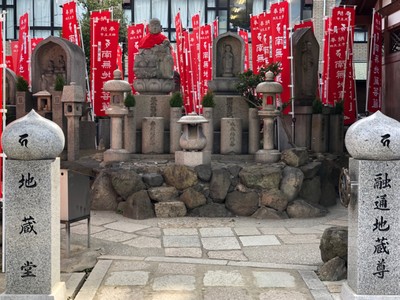 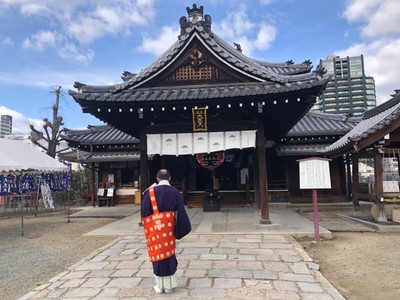 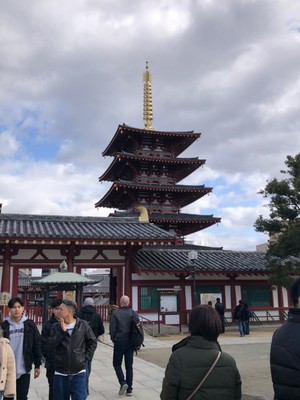 We left the beautiful gardens and entered our favourite place.....the underground! Off we went to see Shitenno Ji temple. A vast area of many buildings, the beauty and perfectly manicured gardens and gravel. So very peaceful. We saw the food stalls and were happy to eat more okonomiyaki. If I haven’t yet described it , and it does vary from place to place, but basically it is cabbage, pork strips and egg cooked on a flat hot plate, then they add okonomiyaki sauce ( like bbq sauce) , mayonnaise and bonito flakes! It is delicious and although Moe insists it was invented in Osaka ( she’s born and bred!) I have been told it was actually invented in Hiroshima......however, both places had great okonomiyaki! ( and she’s probably reading this!!)
By this time Moe was leaving us and we were to see her again this afternoon for a food tour through Osaka! We bid her farewell and Judy and I decided to go to a yarn store we’d found close by. We wanted to buy some Japanese yarn.......oh dear me..........as we left Mick he asked if I needed cash......I’d responded no, as I had our card! Wow! The most amazing yarn store, no one spoke a word of English ( which is fine, I get by!) but silks, wools, hmmmmmmmm.......suffice to say my packing skills are now needed!
Off back to meet the boys, rest our aching feet for 10 minutes and off we go on our food tour. We meet Ralph ( can’t actually remember his name, but from Netherlands), Kyle and Kyle, two actors from Canada, Moe and the 4 of us! We head straight to Kuromon markets! We had already been here yesterday but it didn’t matter.....it is so amazing here I could spend a week here! Then we see it......Moe quietly points it out to me....and I just had to try it........whale meat! It was actually very similar to beef. I said to Mick it didn’t taste fishy.....he said it was a mammal ! He wouldn’t try it but he knows I’ll rarely say no to a new experience! Next up was sushi! We each got a huge tray of tuna, salmon and fatty tuna! Oh soooooooo good! 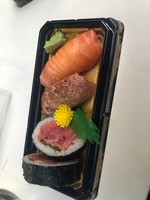 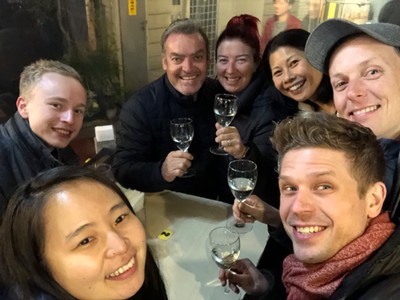 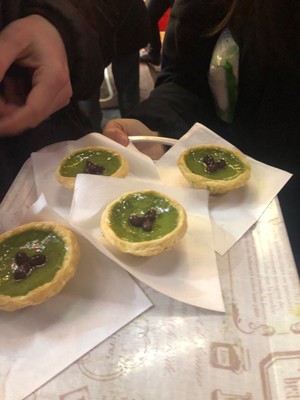 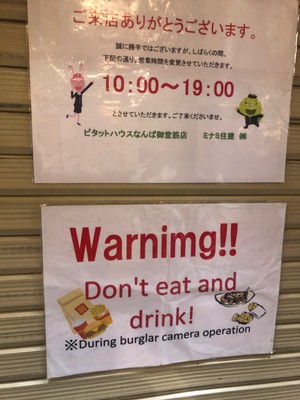 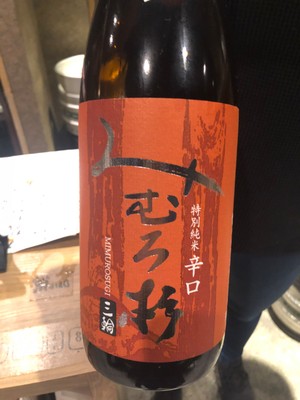 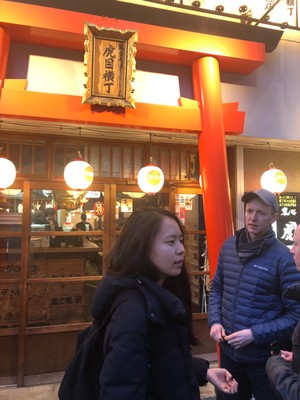 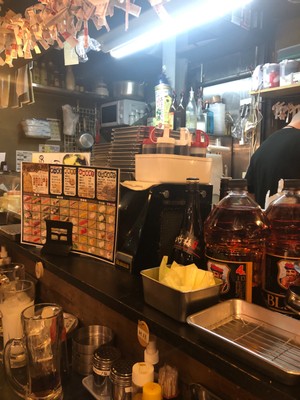 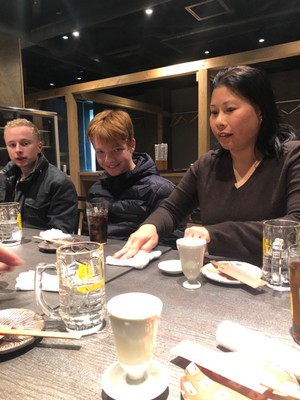 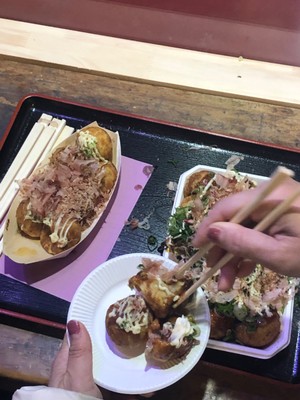 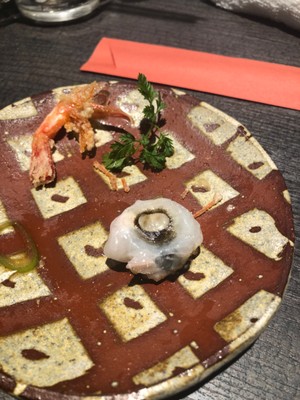 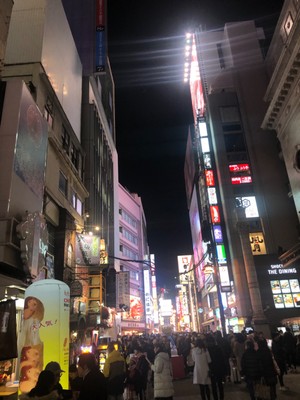 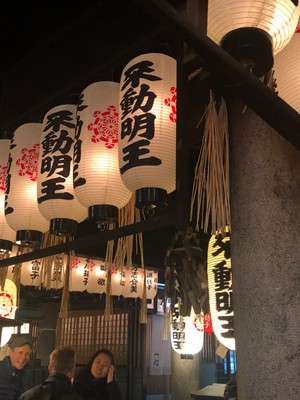 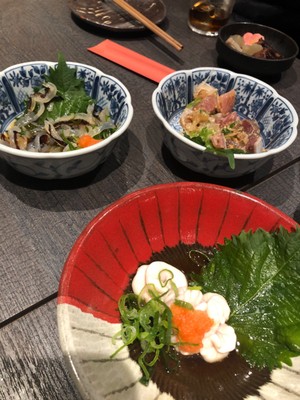 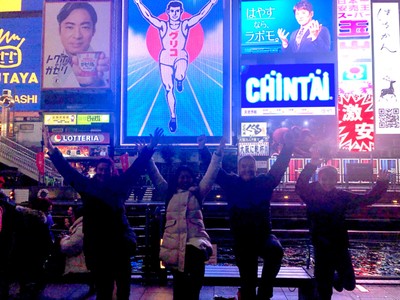 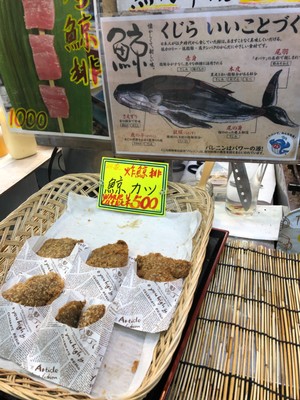 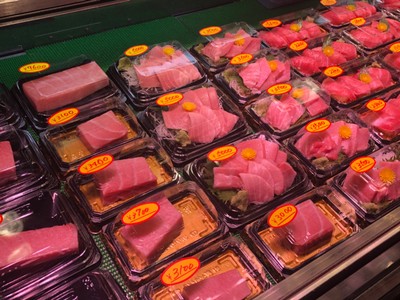 Onto Takoyaki ( octopus balls ) which are apparently from Osaka ( again!) okonomiyaki, yakitori ( skewered everything and deep fried), then onto a special restaurant where the owner travels to 3-4 markets everyday to get unique and different foods and fish.
Moe very kindly said we could eat it, then she’d tell us what it was. Ok, I agree as sometimes knowing what it is turns you off and it tastes delicious. We had jellyfish, fish head ( pulling the meat out!), FUGU ( puffer fish) which tasted like a rubber band, and this cream coloured stuff which was kind of spinny like Intestines...but Moe told us it wasn’t so.......it was kind of sweet, and really creamy, and to be honest really quite nice. We all tried it, except Jack. Then she made the big announcement....it was COD TESTICLES! The colour drained from all the men’s faces.......some put their hands to their mouth.....Moe, she thought it was great! Didn’t expect to be eating fish nuts tonight but anyhoo! Next up the fish head was served. Moe asked who wanted the eye. Apparently the best part......oh, it’s my birthday so she said I should have it.........I was primed, feeling like I was on “ I’m a celebrity get me out of here” ........then just before I put it in my mouth she said to spit out the hard bone around the ball once in my mouth. I lifted it up......a long tendril of snotty stuff ran from it to the plate......I gotta be honest, I wasn’t filled with anticipation.......I put it in my mouth and......oh shit..........this won’t go down.....there it is a har.......ewwwww.......a hard...........ewwwww........ohmygocddddddddddddd I can’t swallow it.........ewwwwwww..........luckily Moe rescued me by passing me a napkin........ewwwwwwww! I really think it was mind over matter but alas, I’m still a fisheye virgin! Saving it for another special occasion!

Wandering through Dotombori and it is soooooooo busy! This place never sleeps. I have been heading downstairs early in the mornings to see the people heading home from the bars and clubs....quite amusing when they’re so drunk, and I am so sober!

Cheese tart was our dessert and they were so good! We ended the tour but decided to head to a sake bar for a sake together. We laughed a lot, the other guys on the tour were really lovely! Sake acquired, group photo taken, we all parted ways with hugs, and headed off to the different corners of Osaka.

Thanks for a great birthday Osaka! I’ll be seeing you next year for Sakura Festival!

Posted by Jochester71 03:56 Archived in Japan